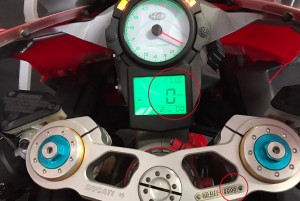 A recent trend considers 0 km bikes to be of high collectible value no matter what. Is it really so?

According to Genesio Bevilacqua “it is not a question of being against or in favour since in a collector's bike the mileage is a secondary element, if not a disadvantage...”

“… the bikes that deserve to be collected are those that mean something on a sporting or technical level, otherwise we are talking about stored vehicles whose only value is personal or that of never having been used.

Those who buy motorbikes do so because they identify with something and the mileage, at this point, is only one element to evaluate when considering identical bikes. We talk about mechanical wear and therefore of a means of transport as such and not of a piece of collectable value."

“…the problem arises when there is the spasmodic search for a 0 km motorbike as a pretext to give value to a bike that otherwise would not have it. But sometimes it is even the opposite, because between two identical bikes, one of which has 0 km whereas the other one has raced, for example, with a given rider, the second is obviously preferable."

“0 Km often becomes a ‘slavery’ precisely when it is its main value if not the only one, because it freezes a bike and prevents the owner from using it.

How much is a motorcycle worth that has as its main value that of being 0 km, once it is moved? Paradoxically, buying a bike at a high price just because of its 0 mileage, means destroying its value by just covering a few meters. What’s the point?"

"We know that enjoyment, even if occasional, is the purpose of collecting. The sense of collecting is not to freeze a motorcycle but to share it, present it and, why not, to ride it, although with due caution in the right contexts.

Indeed, if we go beyond the concept of road bikes and we think of racing bikes, 0 km loses all meaning, as a racing bike that has never raced, has no history."

"It is the use that transforms a mechanical object with two wheels into a motorcycle. Otherwise it is a bit like marrying a beautiful woman and not making love with her for ‘fear of consuming her’.

We certainly don't want to compare motorcycles and women, but if it's true that motorcycles have a soul, they certainly want to do what they are made for. Otherwise we turn from collectors into fetishists."

In the photo, the dashboard of the Ducati 749R, pre series, chassis 0000, and 0 km. It is the bike that at Moto dei Miti we jokingly call "the most zero of all." We are sure that the thing that it would like most to do is to race.

One day, we’ll free her…