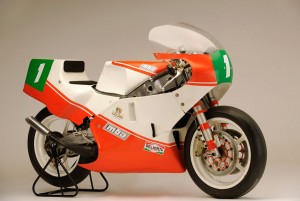 The price of a motorcycle is linked to the number of people willing to buy it.

The value, on the other hand, is linked to why they want to buy it.

There are bikes that are always in the thoughts of fans.

Others that almost do not exist, but when they appear on the market they make competent collectors able to perform real follies.

A unique bike born out of the stubbornness of countering the overwhelming Honda power of those years (we are talking about 1985), then consolidated by the victories of Freddie Spencer, world champion in the 250 and 500 classes.

An artisan workshop, Morbidelli, financed by a small company, Benelli Armi, unite and give free rein to racing masters like Muller, Pileri, Campanelli, Dionigi, with the crazy idea of ​​opposing the Japanese giant.

A configuration, on the V52, which had the purpose of finally making a bike that already existed, but which in the parallel cylinder version, literally drove the rider crazy due to vibrations.

Powered by the new engine, however, the bike was not only drivable, but also very fast. Testing the V52, especially in Misano, Broccoli and Pileri, the latter out of the world races but still very fast, showed that the bike was more than adequate not only to perform well, but even to beat the giant of the golden wing.

These were not fantasies. Proofs, tests, times, surveys and press documents from those years say so, kept together with the motorcycle in the Moto dei Miti headquarters.

The rival of the Honda 250, however, a titanic effort of two small companies, was only available in a single example.

When it was time to produce the "usual" ten motorcycles (two factory bikes plus the rest to be entrusted to customers), in full Morbidelli style, it was realized that the dream required too high investments that were impossible to cover.

Here is the MBA V52. A resurrected Phoenix that never flew.

A one-of-a-kind specimen that hasn't changed history by a hair's breadth also because it hasn't even tried, despite having the certified numbers to succeed.

What did MBA and Paolo Pileri have in mind?

An unattainable dream, which would not come to anyone's mind, but which once in the head is impossible to send away.

A bit like when a real collector encounters a motorcycle that up until that moment he doesn't even have in mind, but for which, right from that moment, he is willing to do anything. In short, a motorcycle like this.