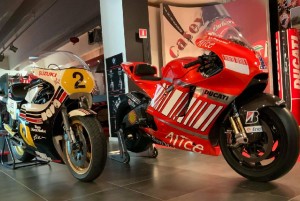 Ability of the men on the track versus designers.

Carburetion and pins against control unit and lambda probes.

Study the driver in corners or read the telemetry in the pits.

In this photo and in history, not only two motorcycles but two ways of understanding motor cycling face each other.

Not a struggle between good and evil or between nostalgia and progress, both at all costs, but two different visions marked by time which is always inexorable and, in the end, always victorious.

We cannot oppose progress and we don’t want to, but we are collectors and look back because we have to, because the future cannot be collected.

We are tuners of instruments that all sound different, sniffers of scents that we only recognize.

We are the grumpy warehouse workers of time, who close their eyes and memorize.

There is always time to appreciate the future, but only if the past is not forgotten.

In the photo, two bikes and two different visions.

Two world champion motorcycles. The first led by a son of his time, the second led by a man already out of place with regard to electronics in which he did not recognize himself and which he could not accept.

You just have to choose ...

If you not change browser settings, you agree to it. Learn more